Last December, our Volunteer, Tom represented VSI at SCI’s Annual International Committee meeting (SCI ICM). Here, representatives from SCI branches from all over the world met to provide updates and honour their efforts over the past year while planning ahead and learning new skills for the future. Here’s what Tom had to say about the events and his experiences at the ICM. 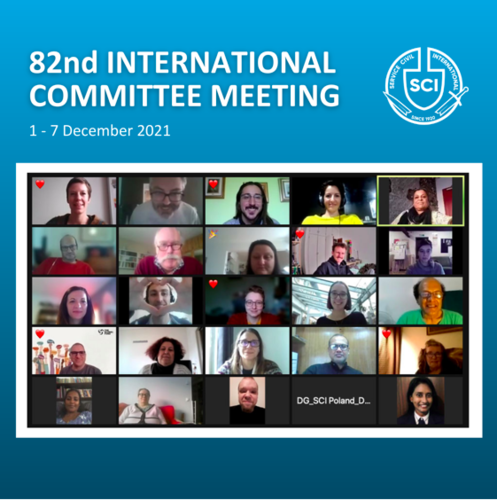 I represented VSI at the annual International Committee Meeting (ICM), the highest decision-making body of SCI from 1 to 7 December 2021, which was online for the third time in history. People connected from different time zones, from Australia to Austria and India to Ireland, for 5 days of discussions and voting. There were two online workshops on the following topics:

“The Evolution of Research on SCI’s Methodology” by Anita, a researcher from the Chinese University of Hong Kong.

On day 1, Jackie, the International President, opened the meeting with a reflection on the role of SCI in today’s world and with a warm welcome to everyone present: around 40 participants from 23 SCI Branches and Groups, as well as Working Groups and other international bodies. After some procedural matters, participants followed up on resolutions and recommendations from the previous years, received the highlights from the Exchange Platform Meeting and had the chance to listen to different reports on what SCI bodies accomplished this year. Ingrid, SCI’s representative and outgoing president at CCIVS (Coordinating Committee for International Voluntary Service), gave a presentation on SCI activities with CCIVS and welcomed the new SCI representative at CCIVS, Hemamali.

Day 2 gave space to Working Groups to present the work in their regions and discussed the idea of a new international campaign for the movement. The Plan of Action 2021 was evaluated and the Plan of Action for next year discussed; finally, resolutions and recommendations were presented to all participants.

Day 3 was all about finances: looking at this year’s accounts and future budget. New IEC candidates were also presented and given time for a Q&A session.

Day 4 was the time to discuss resolutions, recommendations and amendments. Some animated debates took place, showing SCI’s variety of points of view and backgrounds, but always keeping a very respectful tone and collaborative attitude. Being the 5th of December – International Volunteer Day – the SCI international volunteering fair was happening parallel to the meeting and participants to the ICM paid it a visit during their break.

The last day, urgent resolutions and recommendations were presented and voted upon, and the IEC elections took place. Bert Verstappen, who was already a co-opted member for one year, and Alena Lemisev from SCI Germany were elected.

The ICM evaluation was done in an interactive way, with a colourful Jamboard, and it was very positive.

Every year the ICM awards projects that deserve special mention because of their innovative nature or the impact they achieved. This year’s winners:

SCI Malaysia for the category “Promotion of SCI values and history” with their project “99+1 Nasi Ahad”.

SCI Italy for the category “Social Inclusion” with their project “MicroProS”.

The year ahead: There has been some changes in the staff and executive team which will affect how SCI will operate during 2022. Jackie Purves stepped down as SCI’s International President, after 5 years in the IEC with one year as President. Chantal, SCI’s International Coordinator, is moving on to new ventures and we wished her all the best.